Fallout UIF brought by a new mode with Fallout 4

There are many fans of open-world games, including for games such as Fallout 4. The newest mod brings New Vegas to the story and it is called the Union of Independent Federations (UIF). The faction is the fifth main one and it has its own ending.

The UIF mode takes the player out of Boston and it introduces the surrounding areas of Brockton and Lowell. The player can make morality grey and according to the team behind the mode, there will be Evil choices available and the game will be thrilling.

The UIF mode brings to the table exiting feature such as:

This role-playing game has been developed by Bethesda and it is the fifth from the Fallout series. The game was released over two years ago for PS4, Xbox One and Windows. The action takes place in the post-apocalyptic environment of Boston city and the surrounding area known as the Massachusetts region. The game was well received by critics and it even got a couple of awards such as Academy of Interactive Arts & Sciences and the British Academy Game Awards.

The story of Fallout 4 begins at the character’s home near Concord, Massachusetts.  The player’s family has been approved into Vault 11, the fallout shelter and just minutes after receiving the news, a nuclear attack takes place. The player has to witness the death of his/her spouse and the kidnapping of their son: Shaun. A thirst for revenge is born.

GTA V Single Player DLC - When Will We Receive It?

How to Install Optifine 1.12.1 for Minecraft

Read More
VVideo Game News
Last year we’ve seen re-released of other titles on the 3DS Eshop. Those were Pokémon Red, Blue, and… 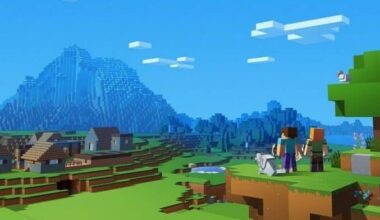 Read More
VVideo Game News
The newest Minecraft update is here for PS4 and it brings bug fixes, as well as upgrades. The…