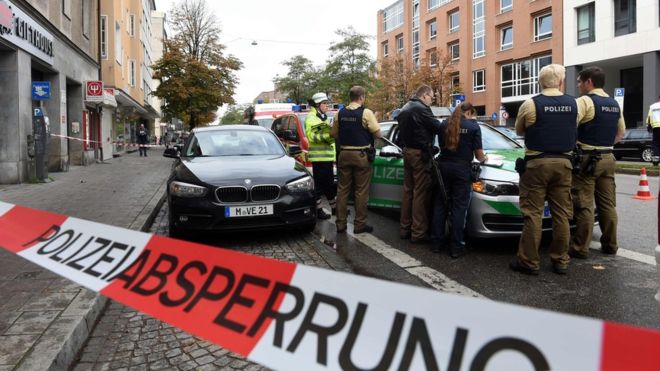 GERMANY – A man attacked several people with knives in Munich on Saturday, October 21st. Four people were slightly injured according to the police, who could not provide any explanation as to the motive of the attacker. A suspect was arrested.

The suspect was arrested “around 11:30,” according to a police spokesman Marcus da Gloria Martins.

In the afternoon, the German police confirmed that the man arrested was the suspect of the attack. “There is more danger,” Munich police said on Twitter.

The arrested is urgently suspect. There is no more danger in #munich ! #Rosenheimerplatz

The man was questioned at midday by the police, added Marcus da Gloria Martins, for whom it is still “too early” to determine the motive of the attacks. At a press conference in the early afternoon, the authorities said that “nothing makes us think for the moment of a mobile terrorist, political or religious.We think it is a man with psychic problems. ”

A total of six people-five men and one woman-were randomly assaulted at six separate locations, but only four were injured, police said. They suffered “superficial” cuts and were also beaten, he said.

The man did not resist when he was arrested

According to the police, the perpetrator of the attack, a man in his forties with “short” blond hair, fled on a “black bike” and wore a “gray trousers” “and a jacket. He also had a “backpack” and an insulating floor mat for camping.

The perpetrator tried to flee when he was spotted by the police while riding a bicycle a few kilometers south of the scene of the attacks. On the other hand, he did not resist resistance at the time of the interpellation.

The assaults occurred around 8:30 am in the vicinity of Rosenheimer Platz, east of the city center. police asked residents to stay at home.

The city of Munich was the scene in July 2016 of a slaughter caused by an imbalanced German-Iranian teenager who had killed nine people in a shopping center before committing suicide.