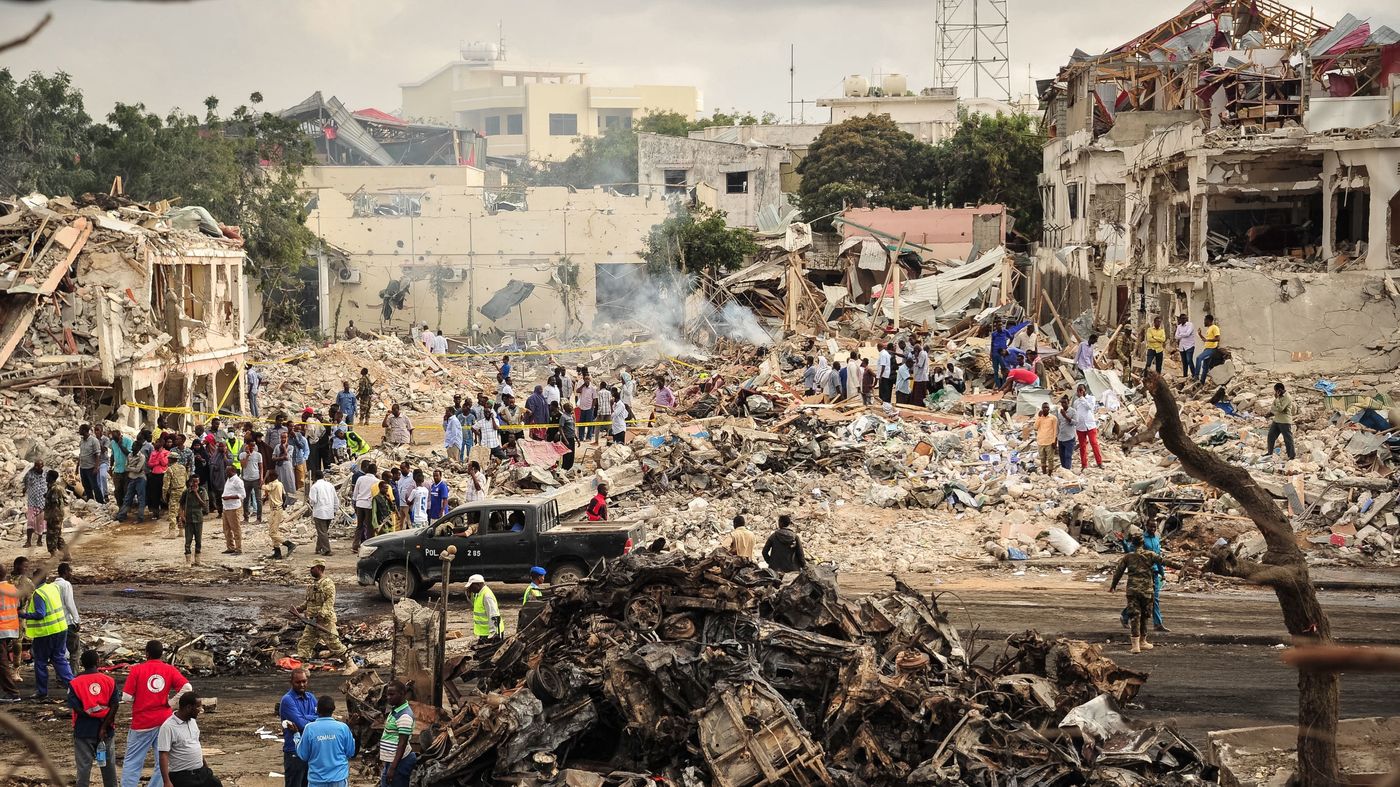 Somalia’s President, Mohamed Abdullahi Mohamed, arrived Sunday at the bedside of the victims of the double car bombing that rocked the center of Somalia’s capital Mogadishu on Saturday. These attacks resulted in more than 230 deaths, according to various medical and security sources.

The explosion, first of all, of a truck parked in front of a hotel in the K5 district, a busy area of ​​the capital which houses official buildings, hotels and restaurants, also caused 300 injured, at least 100 of whom suffer of serious injuries.

The deflagration severely damaged several buildings and set fire to dozens of vehicles.

The most deadly attack in the Horn of Africa nation has not been claimed, but is marked by the Islamists of the Al-Shabab group, which have been brewing this type of attack for months at a time. Mogadishu.

“This is a horrific attack on innocent civilians, which did not target specific Somali government officials. This shows how violent these elements are without mercy, to aim without distinction at innocent people who were merely taking care of their affairs “, said the president in a speech broadcast on television.

“All the hospitals in Mogadishu are filled with the victims of the explosion. What happened yesterday [Saturday] is an unprecedented tragedy, “said Abdukadir Haji Aden, director of the largest ambulance service in Mogadishu.

The UN Special Envoy for Somalia spoke of “revolting” attacks.

In a statement, Michael Keating said he was “shocked and horrified by the number of lives lost in these explosions and the extent of the destruction caused”.

For their part, the United States has indicated that “such cowardly attacks reinforce the United States’ commitment to assist our Somali partners and the African Union in combating the terrorist threat.”

Washington has reinforced this year the drone strikes and other gestures aimed at tracking down and destroying the Shebab militias.

Ankara, the Turkish capital, strongly condemns the double bombing, with Foreign Minister Mevlüt Cavusoglu writing on Twitter that “we are supporting Somalia in the fight against terrorism and we will continue tirelessly to help such atrocious attacks.

Turkey also sent medical aid to Mogadishu and announced its intention to take care of the wounded, a spokesman for the Turkish president said on Sunday.

However, it did not specify the number of injuries that would be transported by air ambulance.

Attacks on a background of dissension

Among the victims of the double bombing were the charge d’affaires of Qatar, injured in the explosions, whose diplomatic mission was damaged by the bombs.

The National Union of Somali Journalists mourns the death of Ali Nur Siyaad, a freelance cameraman killed in the attacks. Four other journalists were injured.

The media organization Voice of America laments a wounded man.

The International Committee of the Red Cross announced that four volunteers working for the Somali Red Crescent Society had been killed.

The double attack on Saturday took place only 24 hours after the unexplained resignation of the Minister of Defense and the army chief and two days after the head of the US command for Africa in Mogadishu meet the Somali president.

A day after the attack, protesters invaded the streets of the capital to denounce the attack.

Jihadis, who have been forced to withdraw from Mogadishu in 2011, have been seeking for 10 years to overthrow the western-backed government and impose a strict version of Islam in Somalia.

Deprived of their main bastions, they nevertheless still control important rural areas, from where they launch guerrilla operations and suicide attacks, whether in the capital or against Somali or foreign military bases.

The African Union has deployed a force of 22,000 troops in the country to maintain peace and fight jihadists.

Read More
UUncategorized
A bomb exploded in the center of Rostov-on-Don, South Russia, around 7 am local time and injured one person.…