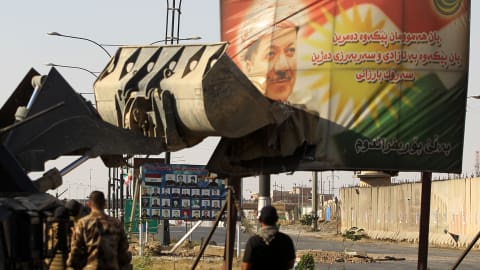 Baghdad responds with arms to referendum on Kurdish independence

The Iraqi army and Shiite militias regained control of several areas and infrastructure in Kirkuk province as part of a military offensive launched in response to the 25 September referendum on the independence of Iraqi Kurdistan. Clashes with Kurdish fighters resulted in several deaths, and thousands of people fled.

The city of Kirkuk, located in the rich oil province of the same name, is the subject of a long-standing dispute between Baghdad and the Kurds. With an estimated 850,000 inhabitants, it is outside the autonomous Kurdish region established after the 2003 US invasion, but is de facto controlled by the Kurds since the Iraqi army fled the region in 2014.

Arguing that the Kurdish referendum of September 25 created a “risk of partition” of Iraq, Iraqi Prime Minister Haidar Al-Abadi explained in a statement that it was his “constitutional duty to impose security and federal authority “in Kirkuk. According to the Kurdish government, the “yes” to independence won 93%.

The Joint Operations Command (JOC), which includes all Iraqi forces involved in the operation, says it has regained control of the largest military base in the region northwest of the city, military airport to the east.

The army said it had also taken control of the headquarters of the North Oil Company, one of the two state-owned oil companies that provide almost all Iraqi government revenue, and the Baba Gargar oil field, one of six in the province.

Iraqi army anti-terrorist units (CTS) and Iraqi police also took control of Kirkuk governorate, General Raed Jawdat, who heads the federal police, told AFP. Kurdish governor Najm Eddine Karim, who was sacked by Baghdad a month ago for organizing a referendum in his province, was not present when forces entered, according to a source in the governorate.

According to residents of Kirkuk, Iraqi forces descended the Kurdish flag, which was floating alongside the Iraqi flag on the governorate since April.

A commander of the Iraqi army had previously told Reuters that the federal troops had “not been ordered to enter the city, only to secure its surroundings”. He had argued that the Kurdish forces had withdrawn from several positions in an orderly manner.

An offensive that the Iraqis will “pay dearly,” according to the peshmerga

In an official statement, the Peshmerga claimed that the Iraqi government was going to “pay dearly” for this operation “of war against the people of Kurdistan”. They accuse a group of the Kurdish Patriotic Union (PUK), opposed to Kurdish President Massoud Barzani, of having “betrayed” by helping the Iraqi forces in their progress.

An adviser to President Barzani, Hemin Hawrami, also denounced on Twitter “internal problems and ambiguous agreements” that led “commanders to order their peshmerga to leave their positions.”

If the army says it has not entered the city of Kirkuk, an Associated Press reporter claims to have seen members of the Shiite militias, the Popular Mobilization Units, stationed at checkpoints in neighborhoods inhabited by the Turkmen minority from the city.

A spokesman for the Popular Mobilization Units (UMP), Ahmed Al-Assadi, merely said that the militias did not enter the center of the city. However, he acknowledged, as did Kurdish officials, that some exchanges of shots occurred in places.

An official of the Kurdish autonomous government also confirmed that the Kurdish fighters and those of the UMP exchanged artillery fire. According to him, the peshmerga managed to repulse two assaults of the Iraqi forces to the south of the city and destroyed armored vehicles of the Shia militias.

The southern province of Kirkuk is generally held by peshmerga affiliated with the PUK, while those patrolling the northern and eastern regions are rather loyal to the Kurdistan Democratic Party (PDK) of Massoud Barzani. The PDK also advocates the independence of Kurdistan, but opposed the holding of a referendum on the subject; rather, he advocated discussions with Baghdad under the aegis of the UN.

According to Sherzah Hassan, Deputy Director of Health in the Jamjamal region, east of Kirkuk, 10 pesherma were killed and 27 others injured in nocturnal fighting against UMP militiamen. He said that this assessment only concerned the hospitals in his zone.

Two people were killed in an artillery fire in Toz Khormatou, a doctor told the hospital. Toz Khormatou, 75 km from Kirkuk, was already shaken every night since Friday by fighting between the peshmerga and units of the UMP.

AFP journalists have also seen Iraqi forces position themselves in this city inhabited by Turkmen and Kurds and located 75 km from Kirkuk, as well as in the city adjoining Dakouk.

An AFP journalist said that thousands of people are now leaving the Kurdish neighborhoods of the city and heading for the two main cities of Iraqi Kurdistan, Erbil and Souleimanyeh. This sudden exodus creates considerable traffic jams, he said.

We live in peace, but politicians do not want us any good, either in Baghdad or in Erbil. They clashed for oil control, and the victims are us, the people of Kirkuk.

This conflict is embarrassing for the US-led international coalition, which is fighting the armed Islamic state group in Iraq and Syria, with the help of Kurdish fighters and the Iraqi army. In a message posted on Twitter, a spokesman called on both sides to exercise restraint and focus on the war with the armed Islamic group, which has been underway for several months.

“We continue to push for dialogue between the Iraqi and Kurdish authorities. All parties must remain focused on fighting our common enemy, the EI, in Iraq, “said a coalition in a statement, using an acronym of the jihadist Islamic group.

Commenting on the armed clashes me Monday night, the coalition said it wants to believe a “misunderstanding” between government troops and the peshmerga, linked in particular to a “bad visibility”.

“The coalition monitors the movement of troops and military vehicles in the vicinity of Kirkuk. These movements […], until then, are simple movements of troops, not attacks, “she wrote.

Pumping in the two main oil fields of Kirkuk ceased Monday afternoon, said a senior official of the Iraqi Ministry of Petroleum. “The Kurdish technicians stopped the pumping operations of the wells of Bay Hassan and Havana and left the wells before the arrival of the Iraqi forces,” he said.

These two fields were taken in 2014 by the peshmerga, in the wake of the chaos engendered by the flash offensive of the EI, which had seized nearly a third of Iraq. Directly managed by the Kurds, they produce 250,000 barrels of oil per day in normal times. The Kurds also directly manage the Khormala field in Kirkuk province.

Three other oil fields – Baba, Jambour and Khabbaz – are under the control of the Iraqi government, which, however, can not export this production due to a lack of a functional oil pipeline. Baghdad last week announced its willingness to rehabilitate an oil pipeline under its control linking Kirkuk to the Turkish port of Ceyhan.

By 2014, Iraq was transporting between 250,000 and 400,000 barrels per day via the 970-kilometer oil pipeline from Kirkuk oilfields, down to Baiji to the south, and then back up to Ceyhan via the Fichkhabour, in northern Iraq.

The Kurdish government, however, built a parallel pipeline, further north from Kirkuk, which also connects with Ceyhan via Fichkhabur. When the 600,000-barrel-a-day pipeline began operating in 2013, the Kurdish authorities disconnected the Iraqi pipeline, which was no longer functioning.

The decision to rehabilitate the Kirkuk-Ceyhan pipeline and reconnect it with Turkey shows “the determination” of the Iraqi government to “reverse the fait accompli created by the Kurds in recent years,” said Ruba Husari, an Iraqi oil expert.

Read More
UUncategorized
Danish citizen of Bosnian origin sympathetic to the group Islamic State, died in the hospital after he engaged…