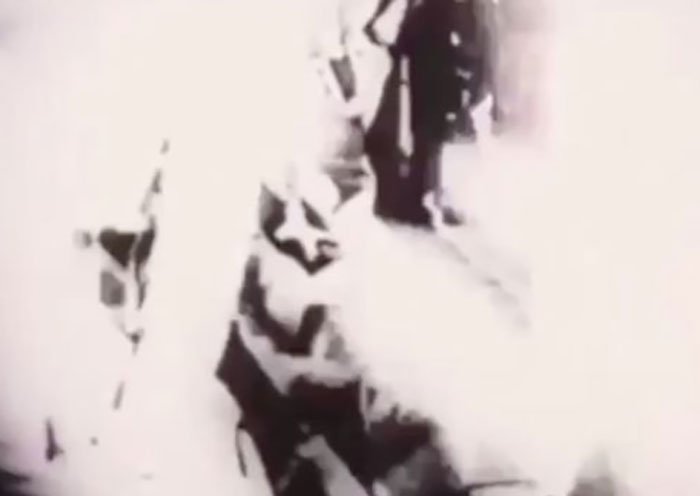 New stunning images of what appears to be an alien transported on a stretcher after the Roswell accident have just surfaced. They were posted on YouTube with the caption: “Roswell crash of UFO, new images of alien bodies”.

In 1947, a supposed UFO crash in area 51 in the USA was reported. The soldiers seemed to confirm the facts at first before asserting a few days later that it was simply a balloon of the army that had crashed.

But conspiracy theorists claim that this new video clearly shows what appears to be medical personnel carrying the body of an alien far from the site of the accident.

The images in fact present scientists gathered around the humanoid-looking body.

Since the mysterious crash, there have been many theories about what really happened in Zone 51, in Nevada in the United States. In the 1990s the US military tried to stifle some of the rumors by revealing that the crashed military balloon was a nuclear test balloon launched under the Mogu Project .

It was a top secret project set up to detect the sound waves generated by the atomic bomb tests of the Soviet Union.

But 30 years after the incident, hundreds of documents emerged and appeared to have been written by people working in Area 51. These documents claimed that there was evidence that at least one extraterrestrial spacecraft, was crushed near Roswell in 1947.

One of the most striking features of the Roswell affair was the black and white film by Spyros Melaris showing men in white coats apparently dissecting the body of an alien.

Millions of people around the world have seen this short film. But Melaris has always insisted that the 17-minute clip was nothing more than a hoax filmed in an apartment in northern London.

And it seems that this new video that made its appearance on Youtube is also a hoax. @ufoofinterest explains indeed on his Twitter account that the video comes from the film “Alien Autopsy” released in 2006. And this excerpt of the film seems to confirm!

North Korea spoke of the possibility of a "nuclear war"

Did Trump Really Say That To A Soldier's Widow?

Read More
UUncategorized
An attack at the American University in Kabul ended with at least 15 killed, Reuters reported, citing a…