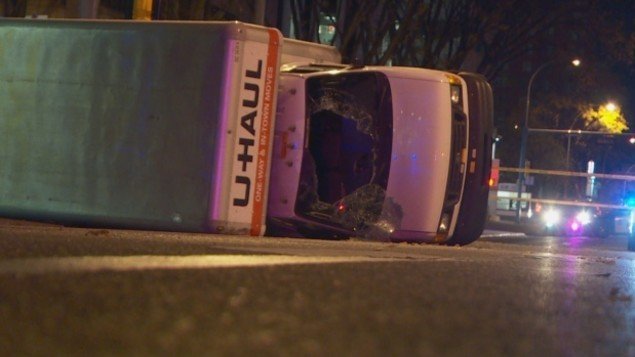 “Act of terrorism” in Edmonton: five wounded, including one policeman

A man who allegedly attacked an Edmonton police officer with a knife before raming a rental truck a few hours later into pedestrians downtown is suspected of “terrorist acts,” police chief Rod Knecht, Sunday morning.

The first incident took place shortly after 10 pm Eastern Time, near the Commonwealth Stadium where an Edmonton Eskimos football game was held during an evening of appreciation to the military.

Outside, a white Chevrolet car suddenly burst past a police barricade, hitting a policeman who was performing routine checks and propelling him a distance of several feet.

An individual got out of the vehicle and attacked the same policeman with a knife, who was hospitalized for life-threatening injuries. The suspect fled on foot, leaving a flag of the armed Islamic group in his vehicle, police confirmed.

A few hours later, a UHaul rental truck arrived at a police checkpoint near the stadium. The driver presented a driver’s license on behalf of the owner of the car involved in the first attack. The policeman recognized the name and made the connection with the previous event. The driver of the truck quickly fled.

The truck deliberately attempted to haul pedestrians along Jasper Avenue, one of the busiest streets in the downtown area on Saturday night. He hit four people and then rolled over and overturned.

The suspect was arrested as a result of this second prosecution, just before 3:00 am Eastern time.

The state of the wounded is unknown at this time.

“We believe that this individual acted alone,” Chief Knecht added at a press conference held early on Sunday.

Mr. Knecht also said that the 30-year-old suspect was known to the authorities, before specifying that after the knife attack on the policeman, the security forces did not expect a second importance.

“Did we have a clue that this event was going to happen? Absolutely not, “continued Chief Knecht.

The police will hold a new press briefing at 3:00 pm Eastern Time.

9 years in prison for Ismaël Habib

Read More
UUncategorized
Since many civilian judges are not supporting the Venezuelan government, it is reported that dictator Nicolas Maduro is…